Kid Gloves or NOT Kid Gloves?

That is the question at the moment. I was at our local BI support group meeting tonight. We were discussing some of the commonly uttered things we in the survivor community hear. Here’s a decent link to some of those things from BrainLine.org if you’d like to read further.

Many of us do not look like we have suffered a brain injury of some kind. It’s often an invisible injury and people do not deal with it the way BI survivors might like them to. It’s now been 3 years since my crash and this thing still rings true – and it just might forever. People rarely know how to interact with you after a brain injury, both strangers and those who you have known and loved for many years before your BI. No one really knows what is like to have a BI until you have one. It’s a problem. In fact, I’m sure I didn’t know what it was like right up until the moment I regained consciousness on May 18th, 2014.  Okay, probably some time later that week I suppose. But anyway, I’m sure I didn’t handle such occasions with the grace I wish people now had. 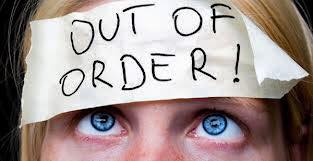 Sometimes I wish I had this sign up there. Sometimes not.

One side of it is tied up in how people aware of your BI interact with you so as not to offend you. Trying to be nice. Maybe they try to treat you like a normal person and perhaps overwhelm you by talking too much or too intensely. Or maybe they speak very slowly or in simple words because they know you’re like that now. That is if they even try.

I’m probably going to be dancing around that double-edged sword for quite a while. I say that because now I’ve begun working part time at one of those large EVERYTHINGYOUCOULDPOSSIBLYNEED** stores. It’s been a really big challenge for me but I think I’m doing okay so far. I hope to write about an effect it has had on me in a short time if I can remember to do it. Before I continue I’ll also remind you that what I have is considered a mild traumatic brain injury. Don’t get me wrong, it has been three years I would rather forget (In fact, heh heh heh, I really don’t remember much of the first year and a half – so that’s good I guess.) but I’m up and walking and was even running around for a while. I’m speaking much better now. I’m more organized. Etc.

My condition is much better than many of the BI people I know. I’m very lucky. And that is why I am writing about this situation. Some people are nice to me but they treat me with obvious kid gloves. One of those people is my assistant manager in the garden/landscaping department. To be fair, I was up front about my BI even before I started so I was essentially asking for it. I was worried about using the ladders there. I was worried about looking up to find items in all the stuff way up high above the selling floor. It wasn’t so much of a problem after a couple weeks but it’s like the guy can’t unsee that first impression of me. Can’t really blame him but I’m not comfy with directly telling him he doesn’t have to treat me so tenderly anymore. “I’m a big boy now. My mom even says so…” But hey, he’s a really nice guy and he has told me that I’m doing good work. I’ll take it.

Aaaannnd there’s the other end. There are times when I just cannot keep up with so many things going on at once. Especially when I get swamped with customers with different things they’re looking for, etc. And NO! It is NEVER just a quick question for me. I can’t be rude and just ignore the other customers. but what am I gonna do? I’ve taken quite a bit of crap when I even try to politely say I’m with this customer and I’ll help you as soon as I can. I don’t want to put my current customer on hold right in front of them. And I’d have to shift gears and think about that other question if I’m gonna even half a chance at answering it well. I usually wind up stuck not knowing where something is or how to solve a problem I have no experience with that first customer anyway. I have to think and concentrate on that one problem first. I totally want that sign up on my forehead then. Like a cloak of invisibility until I’m done with them. Or maybe like an Uber car where the icon disappears on your phone when it gets matched with another person needing a ride. The one you match with is the only one you will see after they accept your ride request. The others disappear for you and your car disappears for everyone else, unless it is a pool ride I guess.

And still there’s the list of things people say that do know me. I just can’t please some of them but again, my case is a mild TBI and I’ve gotten better at self-awareness in most of those situations. I usually even keep from cussing or trying to give a smart ass reply. Though I really do like cussing. They say it’s a sign of high intelligence. Or something.

But you know what I guess I really want? It’s to be treated normally. Some of the guys at work really sass each other. “Hey, Doofus, you didn’t this..” or “What are you?” It’s good natured from what I can tell. But I’m not qualified to be in that club when they think they’d offend me with that stuff. I’d love the chance to make a funny reply.

I’d also be liable to take it too seriously so I have to be careful what I wish for. It’s hard to want to be treated normally but only as long as I’m going to be okay with it. Yeah, good luck with that.

** Except, that is, when the store that is so big you could probably see it from the International Space Station DOESN’T carry the item in the actual building, only online. “But we can have it shipped to the store for free and you can pick it up then! Would you like that?” The customers just love that. Uh huh.

I was a long-time jack of all trades. Until suddenly I was different.
View all posts by peterwick →
This entry was posted in Serious Posts on Brain Injury. Bookmark the permalink.